The Challenge: An unexpectedly fraudulent campaign

Nothing is quite as frustrating as when a carefully planned campaign goes totally awry. This is exactly what happened to a national home goods advertiser that launched a major campaign over a holiday weekend. To maximize reach and spend, the brand partnered with a well-known publisher.

There is a belief in the industry that ads purchased through PMPs or direct buys are more resistant to fraud than other buys. So when the team learned — during a regular audit with White Ops — that nearly 90% of impressions from their campaign came from bots, they were extremely distraught. Uncertain of what could have gone wrong in the carefully planned campaign, the retailer reached out to White Ops to investigate.


The Solution: Be careful with audience extension sites

If a publisher uses an audience extension site to secure traffic at the end of a campaign, there is a good chance that bots will operate on these sites to perpetrate further fraud. 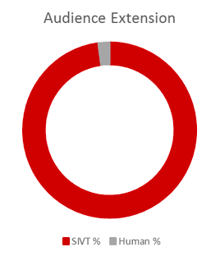 A publisher may pass the ad along to an audience extension site to fulfill campaign requirements, but these sites sometimes have little oversight from the parent publisher and may resort to purchasing traffic from suspicious sources to help the publisher meet their demands. This purchased traffic is often filled with bots, many of which are advanced enough to steal human users’ cookies, which makes it easier for them to get picked up by retargeting campaigns and steal even more.

To meet the high demand of the holiday weekend, the brand had partnered with the publisher in order to access quality-owned and operated websites — but this goal failed to be met. Needless to say, the advertiser was displeased. However, armed with the data from FraudSensor, the brand was able to secure remediation from the publisher.